Dr. Saraco Scholarship for the Arts

Dr. Saraco Scholarship for the Arts 2022

BGC Dovercourt Club played an integral part in formative years of Gennaro Saraco. As a new Canadian, the Club became a place for him to learn many skills such as swimming, math, and even English. As an adult, he fondly recalled his early years at the Club and frequently shared his many memories with a warm smile.

Although he was an educator for most of his life, Dr. Gennaro Saraco was innately creative and had a strong passion for the arts. He painted, wrote, and acted during his life - passions which he enjoyed and always encouraged in his children. In his memory, we look forward to giving back to the community that played such an integral role in who he was. 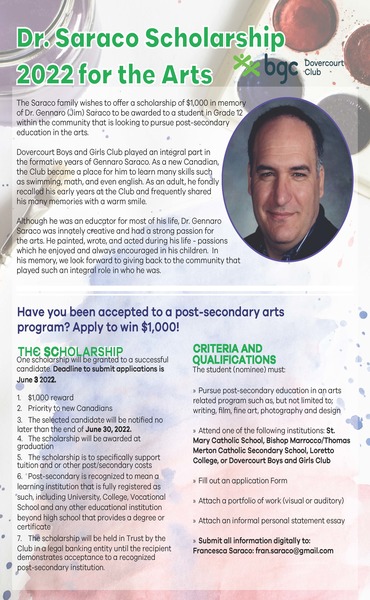